♦ What is meningitis?
Is an acute inflammation of the protective membranes covering the brain and spinal cord, known collectively as the meninges.

♦ Signs and symptoms
• In adults
The most common symptom of meningitis is a severe headache, occurring in almost 90% of cases of bacterial meningitis, followed by nuchal rigidity (the inability to flex the neck forward passively due to increased neck muscle tone and stiffness).
The classic triad of diagnostic signs consists of
1_nuchal rigidity,
2_sudden high fever,
3_altered mental status
however, all three features are present in only 44–46% of bacterial meningitis cases. If none of the three signs are present, acute meningitis is extremely unlikely. Other signs commonly associated with meningitis include photophobia (intolerance to bright light) and phonophobia (intolerance to loud noises).
• Small children often do not exhibit the aforementioned symptoms, and may only be irritable and look unwell. The fontanelle (the soft spot on the top of a baby's head) can bulge in infants aged up to 6 months.
Other features that distinguish meningitis from less severe illnesses in young children are leg pain, cold extremities, and an abnormal skin color.

Meningitis caused by the bacterium Neisseria meningitidis (known as "meningococcal meningitis") can be differentiated from meningitis with other causes by a rapidly spreading petechial rash, which may precede other symptoms. The rash consists of numerous small, irregular purple or red spots ("petechiae") on the trunk, lower extremities, mucous membranes, conjuctiva, and (occasionally) the palms of the hands or soles of the feet. The rash is typically non-blanching; the redness does not disappear when pressed with a finger or a glass tumbler. Although this rash is not necessarily present in meningococcal meningitis, it is relatively specific for the disease; it does, however, occasionally occur in meningitis due to other bacteria.

Other clues on the cause of meningitis may be the skin signs of hand, foot and mouth disease and genital herpes, both of which are associated with various forms of viral meningitis.

♦ Early complications
Additional problems may occur in the early stage of the illness. These may require specific treatment, and sometimes indicate severe illness or worse prognosis.
The infection may trigger sepsis, a systemic inflammatory response syndrome of falling blood pressure, fast heart rate, high or abnormally low temperature, and rapid breathing. Very low blood pressure may occur at an early stage, especially but not exclusively in meningococcal meningitis; this may lead to insufficient blood supply to other organs.
Disseminated intravascular coagulation, the excessive activation of blood clotting, may obstruct blood flow to organs and paradoxically increase the bleeding risk.
Gangrene of limbs can occur in meningococcal disease. Severe meningococcal and pneumococcal infections may result in hemorrhaging of the adrenal glands, leading to Waterhouse-Friderichsen syndrome, which is often fatal. The brain tissue may swell, pressure inside the skull may increase and the swollen brain may herniate through the skull base. This may be noticed by a decreasing level of consciousness, loss of the pupillary light reflex, and abnormal posturing. The inflammation of the brain tissue may also obstruct the normal flow of CSF around the brain (hydrocephalus).
Seizures may occur for various reasons; in children, seizures are common in the early stages of meningitis (in 30% of cases) and do not necessarily indicate an underlying cause. Seizures may result from increased pressure and from areas of inflammation in the brain tissue.
Focal seizures (seizures that involve one limb or part of the body), persistent seizures, late-onset seizures and those that are difficult to control with medication indicate a poorer long-term outcome.

♦ Causes
Meningitis is typically caused by an infection with microorganisms. Most infections are due to viruses, with bacteria, fungi, and protozoa being the next most common causes.
The term aseptic meningitis refers to cases of meningitis in which no bacterial infection can be demonstrated. This type of meningitis is usually caused by viruses but it may be due to bacterial infection that has already been partially treated, when bacteria disappear from the meninges, or pathogens infect a space adjacent to the meninges (e.g. sinusitis).

♦ Bacterial
The types of bacteria that cause bacterial meningitis vary according to the infected individual's age group.

• In premature babies and newborns up to three months old, common causes are group B streptococci (subtypes III which normally inhabit the vagina and are mainly a cause during the first week of life) and bacteria that normally inhabit the digestive tract such as Escherichia coli (carrying the K1 antigen).
Listeria monocytogenes (serotype IVb) is transmitted by the mother before birth and may cause meningitis in the newborn.
• Older children are more commonly affected by Neisseria meningitidis(meningococcus) and Streptococcus pneumoniae (serotypes 6, 9, 14, 18 and 23) and those under five by Haemophilus influenzae type B (in countries that do not offer vaccination).
• In adults, Neisseria meningitidis and Streptococcus pneumoniae together cause 80% of bacterial meningitis cases. Risk of infection with Listeria monocytogenes is increased in persons over 50 years old.
The introduction of pneumococcal vaccine has lowered rates of pneumococcal meningitis in both children and adults.

Tuberculous meningitis, which is meningitis caused by Mycobacterium tuberculosis, is more common in people from countries in which tuberculosis is endemic, but is also encountered in persons with immune problems, such as AIDS.

♦ Diagnosis
• Bloodtest
If someone is suspected of having meningitis, blood tests are performed for markers of inflammation (e.g. C-reactive protein, complete blood count), as well as blood cultures.
The most important test in identifying or ruling out meningitis is analysis of the cerebrospinal fluid through lumbar puncture (LP, spinal tap).
However, lumbar puncture is contraindicated if there is a mass in the brain (tumor or abscess) or the intracranial pressure(ICP) is elevated, as it may lead to brain herniation. If someone is at risk for either a mass or raised ICP (recent head injury, a known immune system problem, localizing neurological signs, or evidence on examination of a raised ICP), a CT or MRI scan is recommended prior to the lumbar puncture.
• Lumbar puncture
The CSF sample is examined for presence and types of white blood cells, red blood cells, protein content and glucose level.
• Gram staining of the sample may demonstrate bacteria in bacterial meningitis, but absence of bacteria does not exclude bacterial meningitis as they are only seen in 60% of cases; this figure is reduced by a further 20% if antibiotics were administered before the sample was taken. Gram staining is also less reliable in particular infections such as listeriosis.
• Microbiological culture of the sample is more sensitive (it identifies the organism in 70–85% of cases) but results can take up to 48 hours to become available. The type of white blood cell predominantly present (see table) indicates whether meningitis is bacterial (usually neutrophil-predominant) or viral (usually lymphocyte-predominant), although at the beginning of the disease this is not always a reliable indicator.
Less commonly, eosinophils predominate, suggesting parasitic or fungal etiology, among others.

♦ Vaccination
• Meningococcus vaccines exist against groups A, B, C, W135 and Y. In countries where the vaccine for meningococcus group C was introduced, cases caused by this pathogen have decreased substantially.
• Routine vaccination against Streptococcus pneumoniae with the pneumococcal conjugate vaccine (PCV), which is active against seven common serotypes of this pathogen, significantly reduces the incidence of
neumococcal meningitis

♦ Bacterial meningitis
Structural formula of ceftriaxone, one of the third-generation cefalosporin antibiotics recommended for the initial treatment of bacterial meningitis.
• Empiric antibiotics (treatment without exact diagnosis) should be started immediately, even before the results of the lumbar puncture and CSF analysis are known. The choice of initial treatment depends largely on the kind of bacteria that cause meningitis in a particular place and population.
Empirical therapy may be chosen on the basis of the person's age, whether the infection was preceded by a head injury, whether the person has undergone recent neurosurgery and whether or not a cerebral shunt is present.
In young children and those over 50 years of age, as well as those who are immunocompromised, the addition of ampicillin is recommended to cover Listeria monocytogenes.
• Once the Gram stain results become available, and the broad type of bacterial cause is known, it may be possible to change the antibiotics to those likely to deal with the presumed group of pathogens. The results of the CSF culture generally take longer to become available (24–48 hours). Once they do, empiric therapy may be switched to specific antibiotic therapy targeted to the specific causative organism and its sensitivities to antibiotics.
For an antibiotic to be effective in meningitis it must not only be active against the pathogenic bacterium but also reach the meninges in adequate quantities; some antibiotics have inadequate penetrance and therefore have little use in meningitis.
• Tuberculous meningitis requires prolonged treatment with antibiotics. While tuberculosis of the lungs is typically treated for six months, those with tuberculous meningitis are typically treated for a year or longer.

♦ Prognosis
Untreated, bacterial meningitis is almost always fatal.
Viral meningitis, in contrast, tends to resolve spontaneously and is rarely fatal. With treatment, mortality (risk of death) from bacterial meningitis depends on the age of the person and the underlying cause.
Of newborns, 20–30% may die from an episode of bacterial meningitis. This risk is much lower in older children, whose mortality is about 2%, but rises again to about 19–37% in adults. Risk of death is predicted by various factors apart from age, such as the pathogen and the time it takes for the pathogen to be cleared from the cerebrospinal fluid, the severity of the generalized illness, a decreased level of consciousness or an abnormally low count of white blood cells in the CSF. Meningitis caused by H. influenzae and meningococci has a better prognosis than cases caused by group B streptococci, coliforms and S. pneumonia.
In adults, too, meningococcal meningitis has a lower mortality (3–7%) than pneumococcal disease.
Tuberculous meningitis in children continues to be associated with a significant risk of death even with treatment (19%), and a significant proportion of the surviving children have ongoing neurological problems. Just over a third of all cases survives with no problems.

♦ History
Some suggest that Hippocrates may have realized the existence of meningitis, and it seems that meningism was known to pre-Renaissance physicians such as Avicenna.
The description of tuberculous meningitis, then called "dropsy in the brain", is often attributed to Edinburgh physician Sir Robert Whytt in a posthumous report that appeared in 1768, although the link with tuberculosis and its pathogen was not made until the next century. 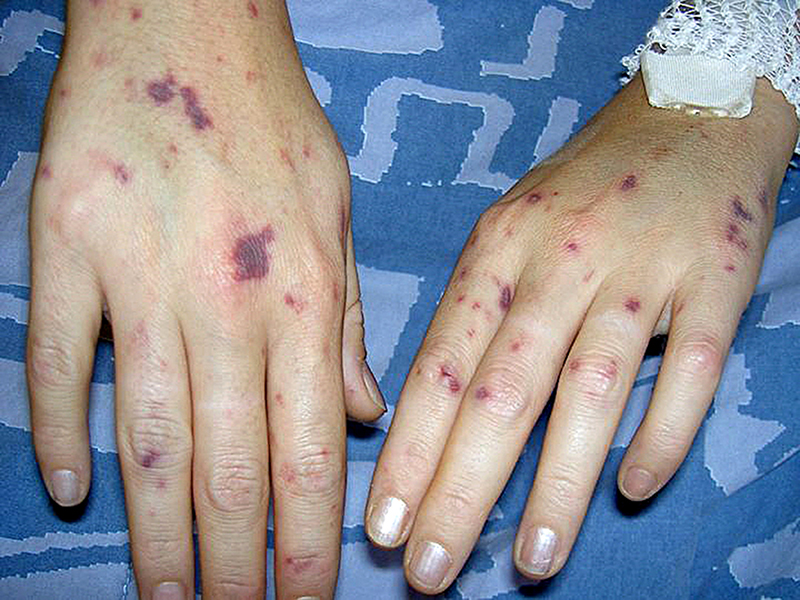