♦ What is syphilis?
Is a sexually transmitted infection caused by the bacterium Treponema pallidum subspecies pallidum.

♦ Signs and symptoms
are vary depending in which of the four stages it presents (primary, secondary, latent, and tertiary).

• primary stage
Is typically acquired by direct sexual contact with the infectious lesions of another person. Approximately 3 to 90 days after the initial exposure (average 21 days) a skin lesion, called a chancre, appears at the point of contact. This is classically (40% of the time) a single, firm, painless, non-itchy skin ulceration with a clean base and sharp borders approximately 0.3–3.0 cm in size. The lesion may take on almost any form. In the classic form, it evolves from a macule to a papule and finally to an erosion or ulcer. Occasionally, multiple lesions may be present (~40%), with multiple lesions being more common when coinfected with HIV. Lesions may be painful or tender (30%), and they may occur in places other than the genitals (2–7%). The most common location in women is the cervix (44%), the penis in heterosexual men (99%), and anally and rectally in men who have sex with men (34%).
Lymph node enlargement frequently (80%) occurs around the area of infection, occurring seven to 10 days after chancre formation. The lesion may persist for three to six weeks if left untreated.

• secondary syphilis
Occurs approximately four to ten weeks after the primary infection. While secondary disease is known for the many different ways it can manifest, symptoms most commonly involve the skin, mucous membranes, and lymph nodes. There may be a symmetrical, reddish-pink, non-itchy rash on the trunk and extremities, including the palms and soles. The rash may become maculopapular or pustular. It may form flat, broad, whitish, wart-like lesions on mucous membranes, known as condyloma latum.
All of these lesions harbor bacteria and are infectious. Other symptoms may include fever, sore throat, malaise, weight loss, hair loss, and headache.

• latent syphilis
Which can last for years, there are few or no symptoms.

• tertiary syphilis
May occur approximately 3 to 15 years after the initial infection, and may be divided into three different forms:
1) gummatous syphilis (15%)
2) late neurosyphilis (6.5%)
3) Cardiovascular syphilis (10%).
Without treatment, a third of infected people develop tertiary disease. People with tertiary syphilis are not infectious.

• Congenital
Is that which is transmitted during pregnancy or during birth. Two-thirds of syphilitic infants are born without symptoms. Common symptoms that develop over the first couple of years of life include enlargement of the liver and spleen (70%), rash (70%), fever (40%), neurosyphilis (20%), and lung inflammation(20%). If untreated, late congenital syphilis may occur in 40%, including saddle nose deformation, Higoumenakis sign, saber shin, or Clutton's joints among others.
Infection during pregnancy is also associated with miscarriage.

Humans are the only known natural reservoir for subspecies pallidum. It is unable to survive more than a few days without a host.

♦ Diagnosis
Syphilis is difficult to diagnose clinically during early infection. Confirmation is either via blood tests or direct visual inspection using dark field microscopy. Blood tests are more commonly used, as they are easier to perform.
Diagnostic tests are unable to distinguish between the stages of the disease.

♦ Antibiotics
Syphilis can be effectively treated with antibiotics. The preferred antibiotic for most cases is benzathine benzylpenicillin injected into a muscle. In those who have a severe penicillin allergy, doxycyclineor tetracycline may be used.
In those with neurosyphilis, intravenous benzylpenicillin or ceftriaxone is recommended. During treatment people may develop fever, headache, and muscle pains, a reaction known as Jarisch-Herxheimer.

♦ Epidemiology
In 2015, about 45.4 million people were infected with syphilis, with 6 million new cases. During 2015, it caused about 107,000 deaths, down from 202,000 in 1990. After decreasing dramatically with the availability of penicillin in the 1940s, rates of infection have increased since the turn of the millennium in many countries, often in combination with human immunodeficiency virus (HIV). This is believed to be partly due to increased promiscuity, prostitution, decreasing use of condoms, and unsafe sexual practices among men who have sex with men.
In 2015, Cuba became the first country to eliminate mother-to-child transmission of syphilis.

♦ History
The origin of syphilis is disputed. Syphilis was present in the Americas before European contact, and it may have been carried from the Americas to Europe by the returning crewmen from Christopher Columbus's voyage to the Americas, or it may have existed in Europe previously but gone unrecognized until shortly after Columbus’s return. These are the Columbian and pre-Columbian hypotheses, respectively, with the Columbian hypothesis better supported by the evidence.

The first written records of an outbreak of syphilis in Europe occurred in 1494 or 1495 in Naples, Italy, during a French invasion (Italian War of 1494–98). Since it was claimed to have been spread by French troops, it was initially called the "French disease" by the people of Naples.
In 1530, the pastoral name "syphilis" (the name of a character) was first used by the Italian physician and poet Girolamo Fracastoro as the title of his Latin poem in dactylic hexameter describing the ravages of the disease in Italy. It was also called the "Great Pox".

In the 16th through 19th centuries, syphilis was one of the largest public health burdens in prevalence, symptoms, and disability, although records of its true prevalence were generally not kept because of the fearsome and sordid status of sexually transmitted diseases in those centuries. At the time the causative agent was unknown but it was well known that it was spread sexually and also often from mother to child. Its association with sex, especially sexual promiscuity and prostitution, made it an object of fear and revulsion and a taboo. The magnitude of its morbidity and mortality in those centuries reflected that, unlike today, there was no adequate understanding of its pathogenesis and no truly effective treatments. Its damage was caused not so much by great sickness or death early in the course of the disease but rather by its gruesome effects decades after infection as it progressed to neurosyphilis with tabes dorsalis.

The causative organism, Treponema pallidum, was first identified by Fritz Schaudinn and Erich Hoffmann, in 1905. The first effective treatment for syphilis was Salvarsan, developed in 1910 by Paul Ehrlich. The effectiveness of treatment with penicillin was confirmed in trials in 1943.

Before the discovery and use of antibiotics in the mid-twentieth century, mercury and isolation were commonly used, with treatments often worse than the disease. During the 20th century, as both microbiology and pharmacologyadvanced greatly, syphilis, like many other infectious diseases, became more of a manageable burden than a scary and disfiguring mystery, at least in developed countries among those people who could afford to pay for timely diagnosis and treatment.

Many famous historical figures, including Franz Schubert, Arthur Schopenhauer, Édouard Manet, Charles Baudelaire, and Guy de Maupassant are believed to have had the disease.

♦ Arts and literature
An early medical illustration of people with syphilis, Vienna, 1498

The earliest known depiction of an individual with syphilis is Albrecht Dürer's Syphilitic Man, a woodcut believed to represent a Landsknecht, a Northern European mercenary.
The myth of the femme fatale or "poison women" of the 19th century is believed to be partly derived from the devastation of syphilis, with classic examples in literature including John Keats' La Belle Dame sans Merci.

The artist Jan van der Straet painted Preparation and Use of Guayaco for Treating Syphilis, a scene of a wealthy man receiving treatment for syphilis with the tropical wood guaiacum sometime around 1580. 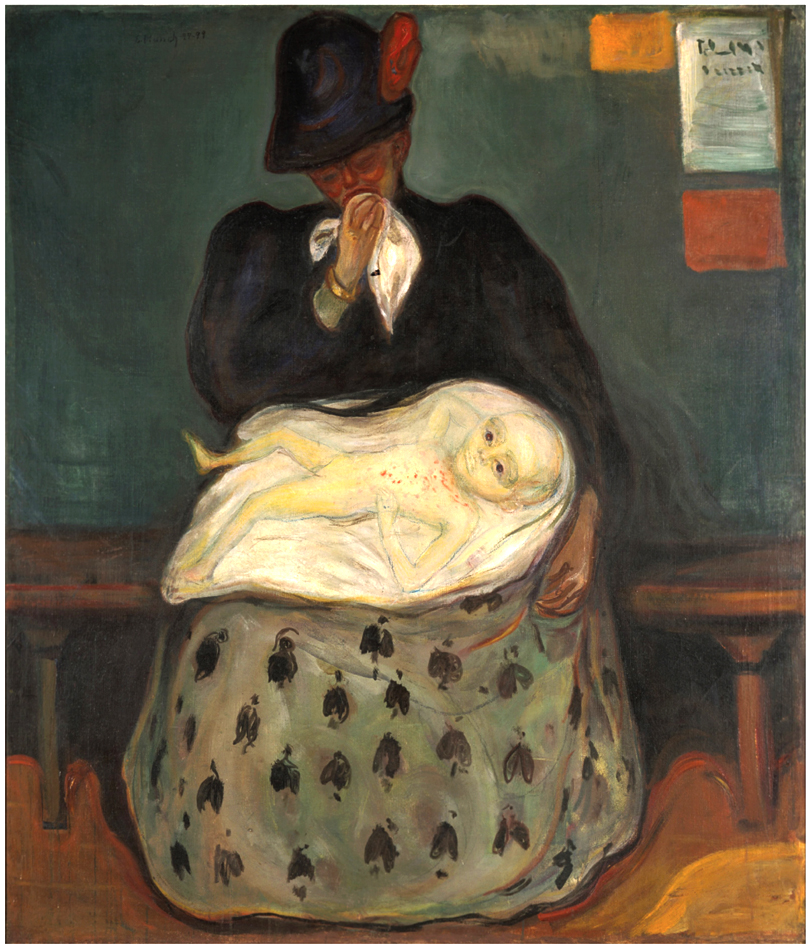