♦ What is Melioidosis?
Is an infectious disease caused by a Gram-negative bacterium called Burkholderia pseudomallei, found in soil and water. It is of public health importance in endemic areas, particularly in northeast Thailand, Vietnam, and northern Australia.
It exists in acute, chronic and latent forms.
Signs and symptoms may include pain in chest, bones, or joints; cough; skin infections, lung nodules, and pneumonia.

B. pseudomallei was previously classed as part of the genus Pseudomonas; until 1992, it was known as Pseudomonas pseudomallei.
It is phylogenetically related closely to Burkholderia mallei which causes glanders, an infection primarily of horses, donkeys, and mules.
The name melioidosis is derived from the Greek melis (μηλις) meaning "a distemper of asses" with the suffixes -oid meaning "similar to" and -osis meaning "a condition", that is, a condition similar to glanders.

• acute melioidosis
In the subgroup of patients where an inoculating event was noted, the mean incubation period of acute melioidosis was 9 days (range 1–21 days).
However, symptoms of melioidosis can appear in 24 hours for those experienced near drowning in water.
Those affected present with symptoms of sepsis (predominantly fever) with or without pneumonia, or localised abscess or other focus of infection.

The presence of non-specific signs and symptoms has caused melioidosis to be nicknamed "the great mimicker".

A wide spectrum of severity exists; in chronic presentations, symptoms may last months, but fulminant infection, particularly associated with near-drowning, may present with severe symptoms over hours. Symptoms usually appear 2 to 4 weeks after exposure.

There are four general types of infection including localized, pulmonary, blood-borne, or disseminated throughout the body. The type and location of the infection usually determines which symptoms appear first as well as which symptoms are more prominent.

Patients with melioidosis usually present with fever. Pain or other symptoms may be suggestive of a clinical focus, which is found in around 75% of patients. Such symptoms include cough or pleuritic chest pain suggestive of pneumonia, bone or joint pain suggestive of osteomyelitis or septic arthritis, or cellulitis. Intra-abdominal infection (including liver and/or splenic abscesses, or prostatic abscesses) do not usually present with focal pain, and imaging of these organs using ultrasound or computed tomography should be performed routinely.

Patients with melioidosis usually have risk factors for disease, such as diabetes, thalassemia, hazardous alcohol use, or renal disease, and frequently give a history of occupational or recreational exposure to mud or pooled surface water. However, otherwise healthy patients, including children, may also get melioidosis.

• latent melioidosis
In latent infection, immunocompetent people can clear the infection without showing any symptoms. However, less than 5% of all melioidosis cases have activation after a period of latency. Patients with latent melioidosis may be symptom-free for decades.
Initially, it was thought that the longest period between presumed exposure and clinical presentation is 62 years in a prisoner of war in Burma-Thailand-Malaysia. However, subsequent genotyping of the bacteria isolate from the Vietnam veteran showed that the isolate may not come from the Southeast Asia, but from South America. This reinstates another report that put the longest latency period for melioidosis as 29 years.
The potential for prolonged incubation was recognized in US servicemen involved in the Vietnam War, and was referred to as the "Vietnam time-bomb". In Australia, the longest recorded latency period is 24 years. Various comorbidities such as diabetes, renal failure, and alcoholism can predispose to reactivation of melioidosis.

♦ Diagnosis
A definitive diagnosis is made by culturing the organism from any clinical sample, because the organism is never part of the normal human flora.
A definite history of contact with soil may not be elicited, as melioidosis can be dormant for many years before manifesting. Attention should be paid to a history of travel to endemic areas in returned travellers.

A complete screen (blood culture, sputum culture, urine culture, throat swab, and culture of any aspirated pus) should be performed on all patients with suspected melioidosis (culture on blood agar as well as Ashdown's medium). A definitive diagnosis is made by growing B. pseudomallei from any site.
A throat swab is not sensitive, but is 100% specific if positive, and compares favorably with sputum culture. The sensitivity of urine culture is increased if a centrifuged specimen is cultured, and any bacterial growth should be reported (not just growth above 104 organisms/ml which is the usual cutoff). Very occasionally, bone marrow culture may be positive in patients who have negative blood cultures for B. pseudomallei, but these are not usually recommended. A common error made by clinicians unfamiliar with melioidosis is to send a specimen from only the affected site (which is the usual procedure for most other infections) instead of sending a full screen.

• Ashdown's medium, a selective medium containing gentamicin, may be required for cultures taken from nonsterile sites. Burkholderia cepacia medium may be a useful alternative selective medium in nonendemic areas, where Ashdown's is not available.

It is not possible to make the diagnosis on imaging studies alone (X-rays and scans), but imaging is routinely performed to assess the full extent of disease. Imaging of the abdomen using CT scans or ultrasound is recommended routinely, as abscesses may not be clinically apparent and may coexist with disease elsewhere.

The differential diagnosis is extensive; melioidosis may mimic many other infections, including tuberculosis.

♦ Prevention
Person-to-person transmission is exceedingly unusual and patients with melioidosis should not be considered contagious.
Lab workers should handle B. pseudomallei under BSL-3 isolation conditions as laboratory-acquired melioidosis has been described.

• postexposure prophylaxis
After exposure to B. pseudomallei (particularly following a laboratory accident) combined treatment with co-trimoxazole and doxycycline is recommended.

♦ Vaccination
There is no vaccine approved for public use. 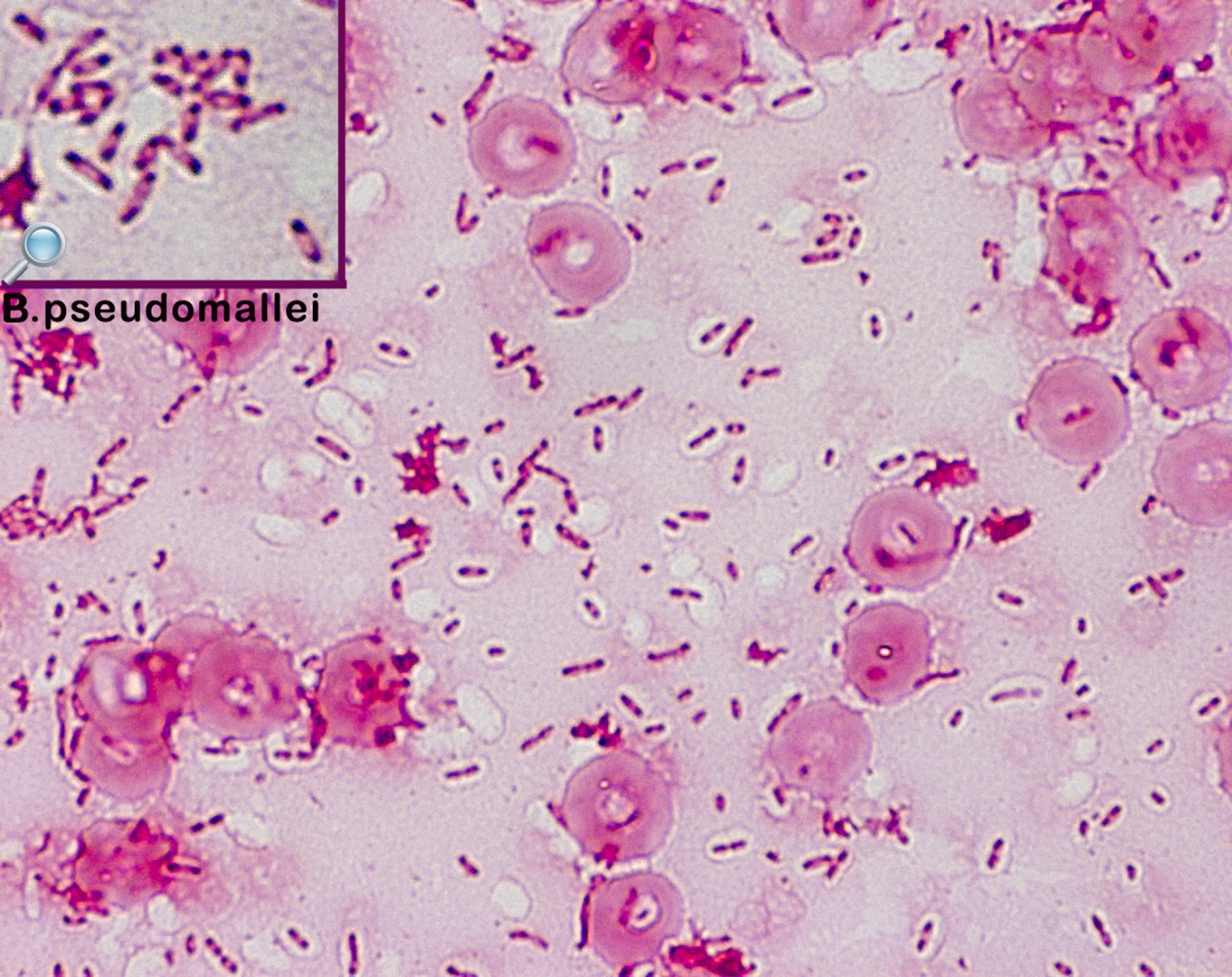